For a long time, I’ve wanted to digitize my collection of DVDs and Blu-Rays. At least in my home, our Apple TV 4K has become the “single pane of glass” for viewing media. We have an XBox One for watching the Blu-Rays but we don’t have a surround sound system so this isn’t much benefit. Additionally, being able to sync our library of DVDs and Blu-Rays to iOS devices in the same you can with iTunes, Amazon Prime, or Netflix content would be handy.

As part of this experiment, I spent a little time reading about Emby, Kodi, and Plex. Plex had caught my eye in particular, because I’d heard friends talk about it and it’s actually a supported application for my NAS (QNAP TVS-471). I’d known of Kodi since its early days when it was called XBox Media Center (XBMC). I knew the least about Emby but a quick glance indicated it had some similarities to Plex but without any distinct advantage I could discern.

When looking at these three solutions and comparing them to the list of what I needed, Kodi was already out. While it’s open source and well established, its story around mobile device sync seems to require a lot of hoops to jump through. Meanwhile, Emby seems to be a middle ground between Kodi and Plex. It allows a client/server model like Plex and seems to handle mobile device sync as well as tvOS pretty well. That said, it’s less robust than Plex and ease-of-use is probably the single most important feature I’m looking for.

After installing each of them and playing with a small sample library, I ended up landing on Plex as my solution. I was surprised at how easy it was to get the library setup. I was impressed with the tvOS and iOS apps so I decided to buy a lifetime membership. Some folks complain about the speed at which features are added. I found many folks saying you shouldn’t pay for a subscription but I’ve found that products you don’t pay for have a habit of disappearing :).

After buying the lifetime membership, I tried out the iOS content sync. It worked surprisingly well - and it’s quite fast if the content is already in the supported container (MP4, h264). Unfortunately, only parts of my library are encoded in a natively supported format for iOS. Normalizing my library is a topic for a separate post - hint: H.265 is probably the right option in the future.

I’ve now got a few TV shows as well as about 30 movies loaded in. The app looks great, here’s a few snaps: 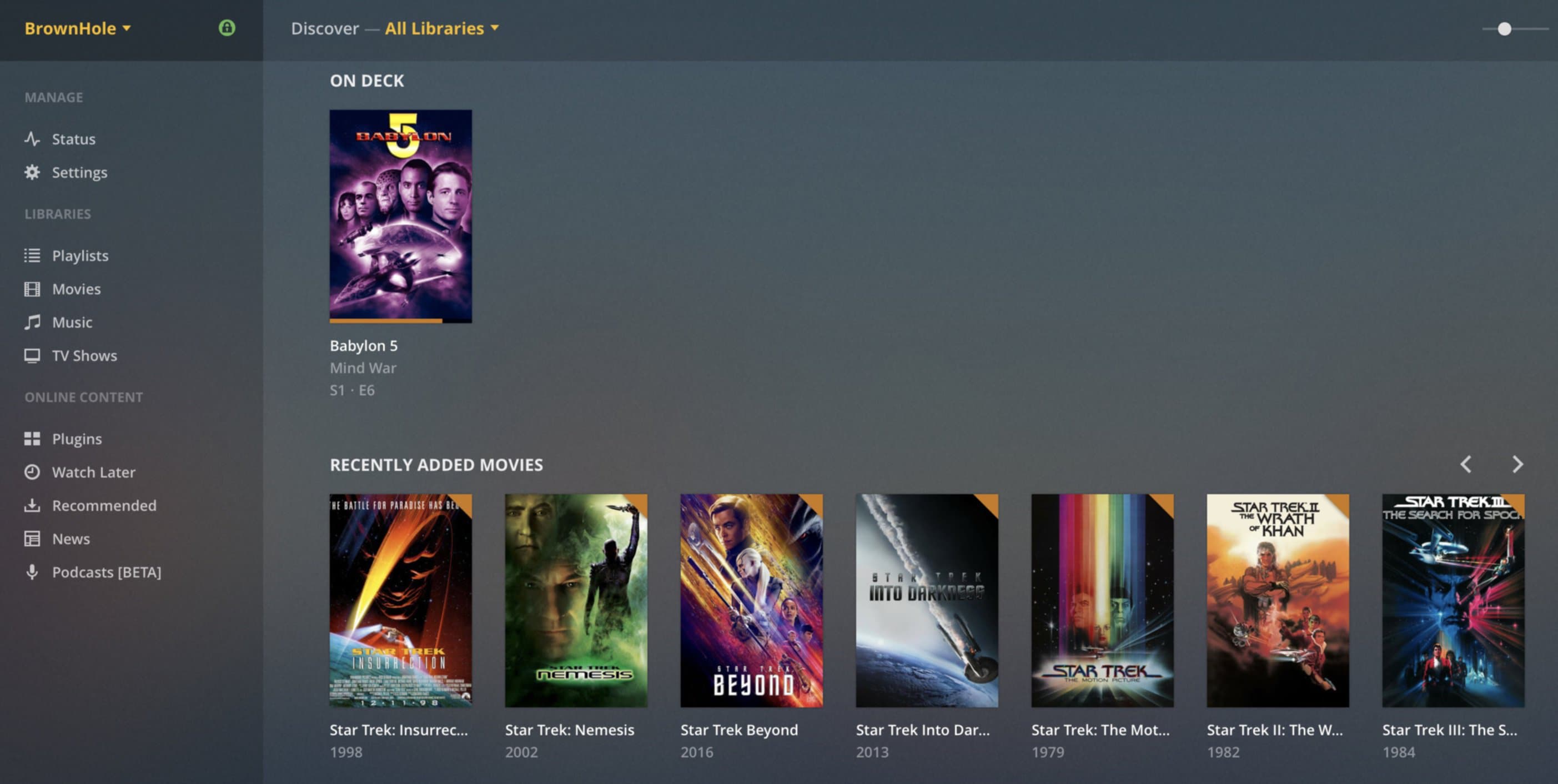 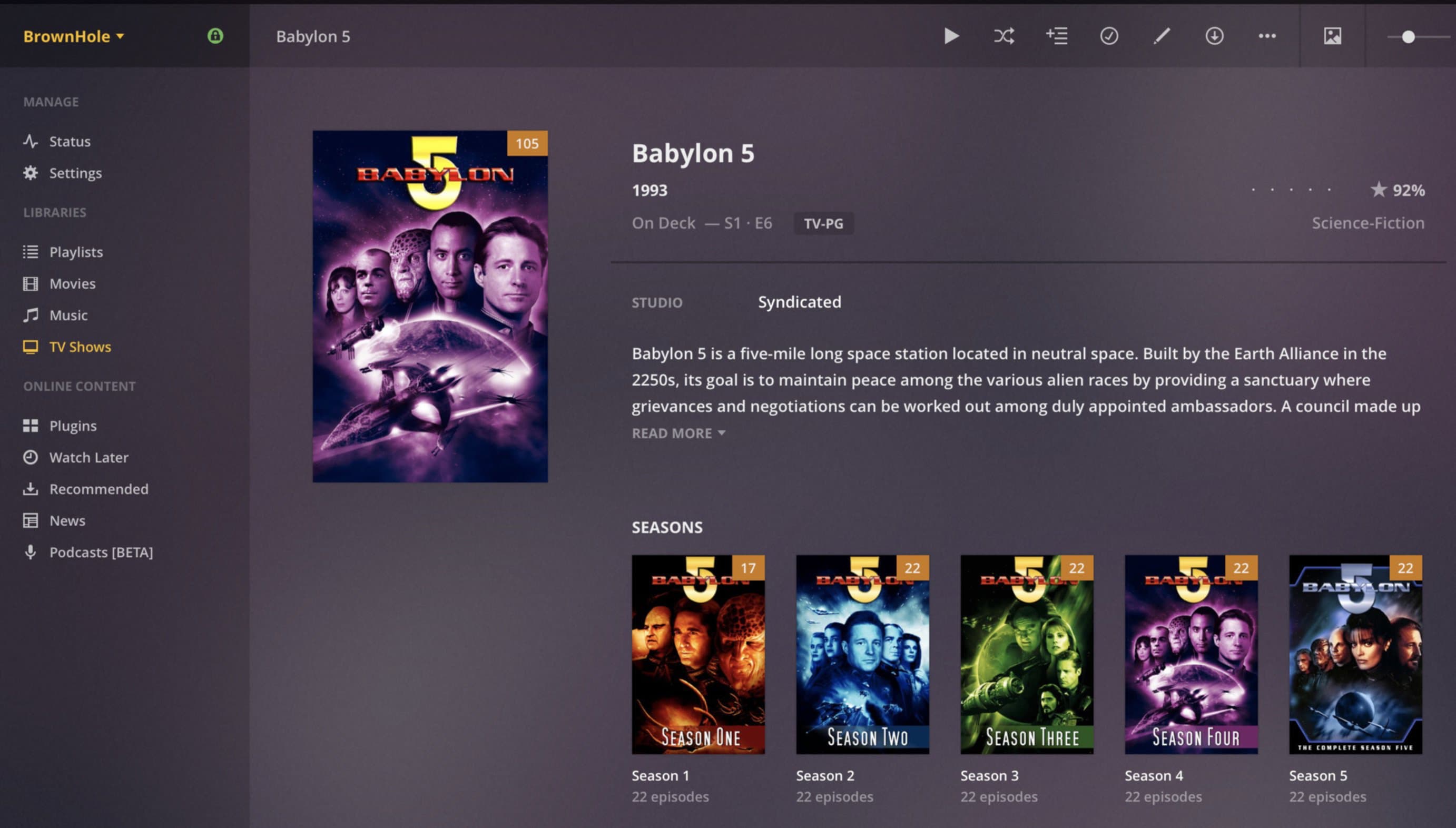 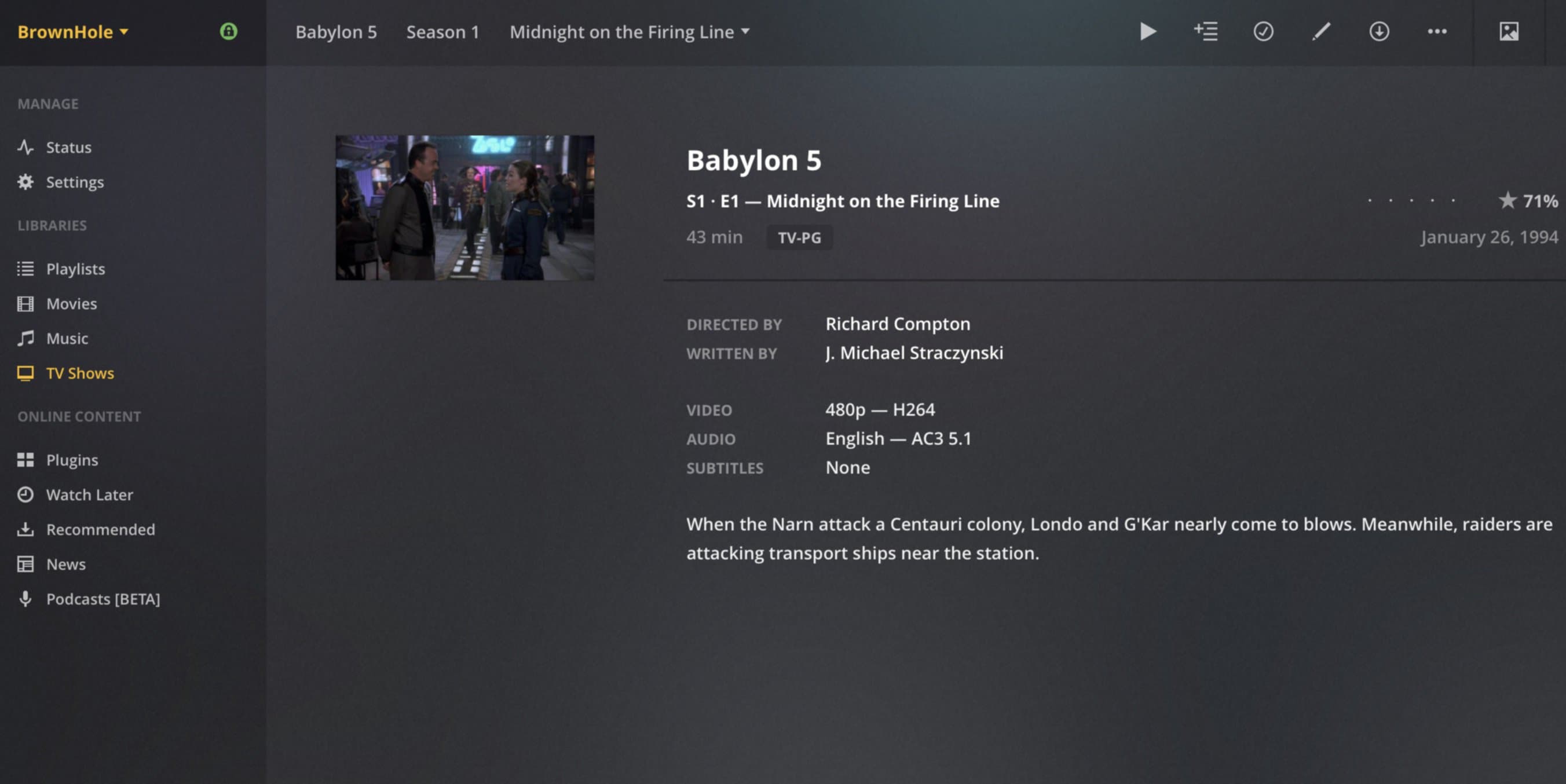 I’ll probably have more to say on this, especially on encoding files. Turns out H.265 (aka HEVC) is incredibly impressive. 10GB encodings of H.265 for movies have incredible detail. That said, it takes a comically long time to encode (8+ hours) a single file on my poor MacBook Pro. However, I have ordered a new gaming desktop that will have the distinct pleasure of encoding content when it’s not being used for games.

More on all that later.